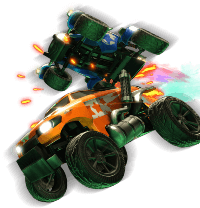 Fragrr provide you with numerous different accounts for Rocket League. Instead of spending weeks and still not getting to the higher ranks, it is better to buy an account that already has the desired rank. Despite of the fact that tricks and skills are to be learned and practised, it is good to buy Rocket League accounts as you won’t get those already bought rocket-powered vehicles anywhere else.

Rocket League is one of the most exciting video games of all times. It has been developed and published by Psyonix. It was released for Windows and PlayStation 4 in July 2015. In Feb 2016 it was released for Xbox One and in Sep 2016 for macOS and Linux.

One of the most attractive features is that it allows cross-platform play, which means that a PS4 and Xbox One player can play the game together without any problem. Also, as you have landed at Fragrr to get an already running account with higher ranks, you are in the right place.

As we have the most professional and experienced sellers, they make sure you make the most out of what you are buying. Also, there are millions of sellers here at Fragrr, if one seller does not has your required account in store, you can move on to the next one. So what are you waiting for? Sign in now and buy the most wanted Rocket League accounts with Fragrr.

Now, as these modes and ranks need quite some tricks and the best rocket-powered vehicle, it might not be available for you in your beginner account. To excel and match the pace of the top players and Rocket League experts, you need a Champion account. To get the best account that includes all the features and non-tradable items, Fragrr is here to help!

If you are a professional gamer and an esport expert, you must be playing Rocket League for long and must have many running accounts. We provide you the opportunity to sell your accounts and earn a lot out of them. There are many beginners or regular players out there who want to get a high ranked account or some rocket-powered vehicle you own.

With Fragrr the sellers have a rating system in which the buyers review their experience with the sellers in form of rating and reviews. Constructive reviews bring in more clients. So, if you are a professional person you will be good at maintaining a positive profile. Moreover, Fragrr makes sure that you earn the most out of your passion.

Fragrr charges explicitly low from sellers and so, selling is easy. So what’s left to worry about? Sign in now and become a part of Fragrr community. We will be proud to have such professional and experienced sellers.

What is Rocket League all about?

Looking at the gameplay, it is a soccer game but is played with rocket-powered vehicles instead of people in the field. These vehicles are supposed to hit the ball to goal and get points in the match.

Now, these rocket-powered vehicles come with various features. The player can jump their cars in the mid-air to hit the ball. These cars include a speed boost to jump off the marked areas on the field.

This enables them to go across the field quickly with increased momentum. This added momentum helps to hit the ball into the goal or crash the opponent’s car. The crashed cars respawn after a few moments.

Another interesting move is dodge. The cars can make a small jump and spin in another direction instantly. It makes easier to nudge the ball as well as get an advantaged position.

Rocket League can be played by two to eight players in one-on-one or four-on-four team. It can also be played in a single mode in which the other player is a computer controlled vehicle.

The match is usually five minutes long and the game can be casual or ranked as per the mode chosen by players. Another game mode, competitive ranked, is played online within game seasons where players fight in different tiered ranks. This leads to raising or lowering the player’s rank in case of victories and losses respectively.

Rocket League has brought various updates on game modes for its players from time to time. The core rules can be modified by the players in these new updates. Some of the most attractive game modes include ‘mutator’ in which the gravity, size, speed and bounciness of the ball can be modified.

Another mode, ‘Ice-hockey’ features the game on an ice rink with soccer ball replaced with a hockey puck. In ‘Hoops’ mode, the game is based on basketball matches with a basketball that has to be bucketed.

The ‘Rumble’ mode includes some unique features such as ability to freeze the ball and causing problems for some other player in controlling his car. In ‘Dropshot’ mode, the match takes place on hexagonal tiles instead of field with an electrified ball. As the ball hits the tiles, they are excluded and points are scored.

The team who scores gets back the normal floor. Therefore, these modes and updates have made Rocket League quite a fascinating game with more than 400 million player base at the start of 2019.

So what are you waiting for? Register with Fragrr now and start buying or selling Rocket League Accounts.